The phrase is in itself interesting as well as ambiguous. It says something about “raining”, “cats and dogs”, but there is no factual information of its origin. There are myths about it as it might have its roots in Norse mythology, related to heavy raining or dead animals in the streets picked up by storm waters. 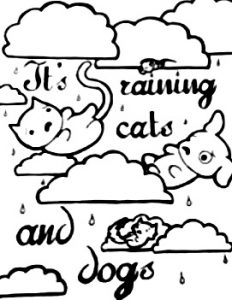 the idiom relates to “something that you say when it’s raining very heavily”. The first recorded use of the phrase was in the 1651 collection of the poems Olor Iscanus. It is not related to “cats and dogs” nor cats and dogs falling from the sky.

There is not any factual information of such incidents. But small creatures like frogs, fish do get carried away by strong winds but that’s not the case. But there as may mythical theories.

So why cats and dogs? As some of the popular theories suggest:

Among the many theories we can relate to this perhaps, the most precise explanation to it would be:

From 16th century England, houses had thatched roofs-thick straw-piled high, with no wood underneath. It was the only place for animals to get warm, so all the cats and other small animals (mice, bugs) lived in the roof. When it rained it became slippery and sometimes the animals would slip and fall off the roof. Hence the saying “It’s raining cats and dogs.”

Google Feud - Play The Google Game I Bet You Will Lose